The truth based story of the Warren’s most horrifying case makes for a thrilling film, that brought box office selling ghost stories to the big screen once again.

In 1971 the Perron family have moved into a new home in Rhode Island to make a fresh start, however after revealing the boarded up cellar, eerie occurrences begin to happen in the house. Such as: the dog barking wildly, unexplained smells and noises in the house and of course one of their daughters being dragged out of bed. The family seek the help of Ed and Lorraine Warren (Patrick Wilson and Vera Farmiga) – who are regarded as the most famous paranormal investigators in the world – to look at their home and deal with the problem. However once Lorraine, who is also a medium, enters the home she senses something much darker at play than just a normal haunting. The evil twisted past of this dilapidated house is beginning to come to life once more, and it plans to destroy the Perron family from the inside.

One of the first things you notice when watching The Conjuring is the money and ideas that have gone into it. Although they are basing on what happened in 1971, the scares and creepy atmosphere that the director James Wan, who is also famous for the Saw franchise and Insidious, creates is one that I have not witnessed from a horror in quite a while.

It’s not only the creepiness that won me over, but also the climax. A lot of horrors are able to create that feeling of unease in us, and they usually do it by not showing us the antagonist until the very end of the film. When we do see it, the CGI created beings usually ruin the rest of the film; for example in White Noise. However The Conjuring keeps you gripped to the screen throughout the entire running time, and at the conclusion you don’t want it to end.

You know how in a horror film there tends to be that one character that just gets on your nerves, it could be the typical dumb blond or the screaming child – although the War of the Worlds remake is not a horror, Dakota Fanning’s character was just unbearable. Well I could not find one fault in the portrayals in this film, yes there were parts were I was thinking ‘why are you looking in the cellar?’ But the actual characters were very likeable, even with 5 young children, and therefore you weren’t rooting for them to be killed, you actually wanted this family to survive the terrors. Patrick Wilson and Vera Farmiga definitely stole the show, as the ghost hunters who were both fully in belief of the supernatural, but were also sceptical when going into a case. That characteristic alone made them one of the most enjoyable things about the film, as they didn’t go into an investigation instantly believing there was paranormal phenomenon involved.

The back story for this film is just so interesting – depending on what type of films you like. But I find it great when you can view a film and then look it up afterwards and discover new things about the story; and The Conjuring is one of those films. As it is based on Ed and Lorraine Warren – the two most famous paranormal investigators – it tries to put as many of their famous encounters into the film as possible, including the infamous ‘Annabelle’ doll case and the Amityville case. We get to take a look inside all of their hauntings and adventures when the film shows the room in their house where they keep all the cursed objects from their travels. If you research about the Warrens and watch the film again, you are bound to spot one or two familiar items. Things like this show that the writers – Chad and Carey Hayes – have thoroughly done their research for the film.

One of the best horrors I have seen in a while, not one that has just been churned out with the same story line. It’s got a great back story, impressive portrayals by Wilson and Farmiga, scares when you least expect them and the thing which always gets me going, an eerie feeling that grabs tight of you and just will not let go.

The Conjuring 2 is set for release in 2015 and a spin-off film about the haunting Annabelle doll titled ‘Annabelle’ is set to be released later this year.

Tag Line: Based On The True Case Files Of The Warrens.

Hell hath no fury like a woman scorned, and when there is two in the mix all hell will break loose.

We have all seen one of these types of films before such as The Last House on the Left and I Spit on Your Grave: some wrong is done to a woman – unfortunately it’s usually sexual assault – and they then go on a rampage to find, torture and kill the culprit. Girls Against Boys however puts a slight spin to the plot, by adding another revenge-fuelled woman into the mix. 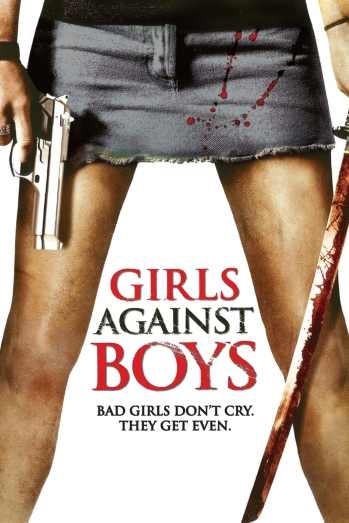 What started for Shae (Danielle Panabaker) as a well planned out weekend in the Hamptons with her boyfriend actually begins with an unexpected breakup, followed by a crazy night out that ends in her assault, meeting along the way a female work colleague named Lu (Nicole LaLiberte), who will forever change her life.

After said assault happens, Lu attempts to help Shae by taking her to the police station. But after no proper help is given and with revenge on Shae’s mind the duo decide to take matters into their own hands. By using various violent forms of negotiation Shae begins a mission to get back at every man who has wronged her; however she may have jumped into the killer lifestyle without asking herself if this is what she really wants to do…something which Lu confirmed to herself a long time ago.

As Shae and Lu indulge in their crusade to rid the world of the filth that is the male gender, they sort of come across as a modern-day Thelma and Louise, but with a lot more killing. Even as a man it is great to see a film about women’s empowerment against the people who think they are superior, mainly because the audience can envision any minority in today’s society and put them in that role. To see a minority – be that homosexuals, ethnic minorities, women – which is looked down upon on a daily basis give the powers that hold them down a taste of their own medicine really gets your blood pumping, as you are rooting for the violent protagonist.

There was a danger at one point of the film losing its moral point in the way that the ‘heroes’ may have just started killing men willy-nilly, but thankfully that does not happen in a way that would have ruined the film – and one that I can’t really explain as it would ruin part of the picture.

Panabaker and LaLiberte play off each other so well throughout the film; we first meet them as colleagues and friends turned murderers, but by the end of the film they become enemies with their different views on the acts they are committing. What was also great about these two talented actresses was how different both characters actually were, even though at one point in the film they both lusted after the same objective. Whereas Lu has always had this opinion on those that have done her wrong, Shae was simply thrust into it by a terrible event, and was blinded by Lu’s talks of retribution. As the film progresses we see both characters’ true colours, as Shae’s humanity begins to sink in, Lu’s insanity flourishes and we see how determined she really is.

I truly was impressed with Girls Against Boys; it took a typical film plot and added a slight twist that changed the entire notion of the film. Also both portrayals by the leading ladies pulled you in; whilst you were constantly rooting for Shae to get even, on the sidelines you were also enjoying hating her murdering mate.

Tag Line: Bad Girls Don’t Cry. They Get Even.

Without a doubt the Spanish REC franchise is one of the best that has been in the horror genre in recent years; and it seems ages since the slightly less enjoyable third installment, REC 3: Genesis, came out. So for those of you, like me, waiting on the news front for something on part 4, prepare to get excited because the official trailer for REC 4: Apocalypse has now been released. 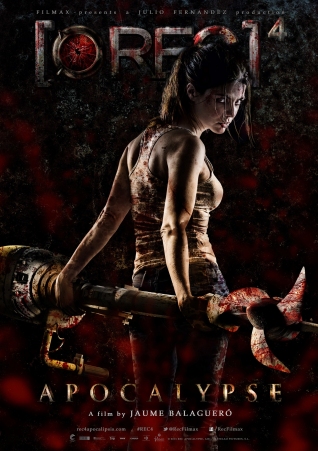 Juame Balaguero (REC/REC 2) is back in the director’s chair again to helm the film, and the story line – to the joy of most fans – is going to stick more to what we saw in the first two films. The plot is set after the second, once again Manuela Velasco is reprising her role as the TV reporter Angela as she has just been evacuated out of the building where the first two films took place. From the trailer all we can really tell at the moment is that it is primarily based on a ship, and just when they thought the virus was contained, all hell breaks loose once again.

I for one am extremely excited for part 4, as the REC series ticks all of the boxes on my horror film list: hand-held camera, great effects, big scares and zombies (sort of). Hopefully with Balaguero back behind the lens REC 4: Apocalypse should be a great addition to the franchise.

REC 4: Apocalypse is set for cinema release on 31st October 2014 in Spain; the release date for the UK is not yet known.