The film that I viewed for this weeks Shocking Saturday was absolutely superb, although not an all round horror – more of a psychological thriller, it still had horrific parts to it and was very enjoyable. Plus the fact that it is was directed by William Friedkin (director of The Exorcist) enticed me even more. 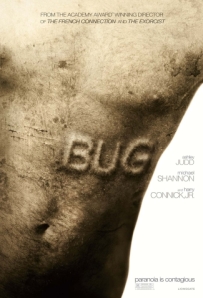 The story centres around Agnes (Ashley Judd) who is living a lonely life in a motel room, drinking, smoking, doing drugs and living in fear of her violent ex-husband. After her child went missing 10 years ago she lets the days pass by without a thought. That is until she is introduced to Peter (Michael Shannon) who explains that all he is looking for is a friend to talk to. Although when the two talk there are a lot of awkward moments, Agnes still lets him stay with her. As the two become closer, she learns of Peter’s terrifying past and wants to help him in any way she can. That begins to proves difficult as Peter starts to complain about there being Aphids (a type of plant lice) crawling about in her room and biting him at night. At first it just appears to be a harmless bug infestation, but as the bug bites become more present and violent, it seems that something more sinister is at work here. Agnes has two options, believe Peter and think there are bugs crawling all over the room and under their skin, or consider the fact that it is all in his mind.

The film not only makes Agnes try to determine what is real and what is not, but is also makes the audience try to decipher between what is a delusion and what is reality. As we try to find out what is happening, ‘Bug’ makes us believe that what Peter is saying is true, and that perhaps he isn’t just a psychotic schizophrenic.

What really carries this film are the stellar performances from Michael Shannon and Ashley Judd. As Agnes (Judd) spends more and more time with Peter (Shannon) she begins to spiral down in to his madness and believe every word that he is saying. Judd did such a great job in showing this, from a lonely, single and probably alcoholic woman to a delusional, paranoid woman.

However it has to said that it is the performance of Michael Shannon which steals the show here. First coming across as a timid, awkward conspiracy theorist and evolving throughout the film in to a full-blown schizophrenic, who will do anything to himself to stop these bugs. Although we don’t want him to take Agnes down as well, when we first meet him his velvety-toned voice and the fact that he only wants a friend makes us sympathise with him, and continue to as the film goes on.

Michael Shannon is one of my favourite actors, I have seen him gradually go up on the silver screen since the early 2000s and always knew that his amazing acting capabilities would eventually be noticed. Now they have been, as his most recent role was as General Zod in the new ‘Man of Steel’ film. Throughout the years he has starred in: Pearl Harbor, 8 Mile, Bad Boys 2, Revolutionary Road, Boardwalk Empire and The Iceman among others.

‘Bug’ proves that William Friedkin can still shock viewers even after all these years. The Exorcist terrified audiences all over the world in 1973 and although viewers have become more desensitized to horror films since then, Bug proves that the genre still has a few tricks up its sleeve.